The Holiday Season is upon us, which means New York City is sprouting ice skating rinks like wild flowers in Spring! The choices can be overwhelming, so I’d like to share a little insight that can help you find your best skating experience! 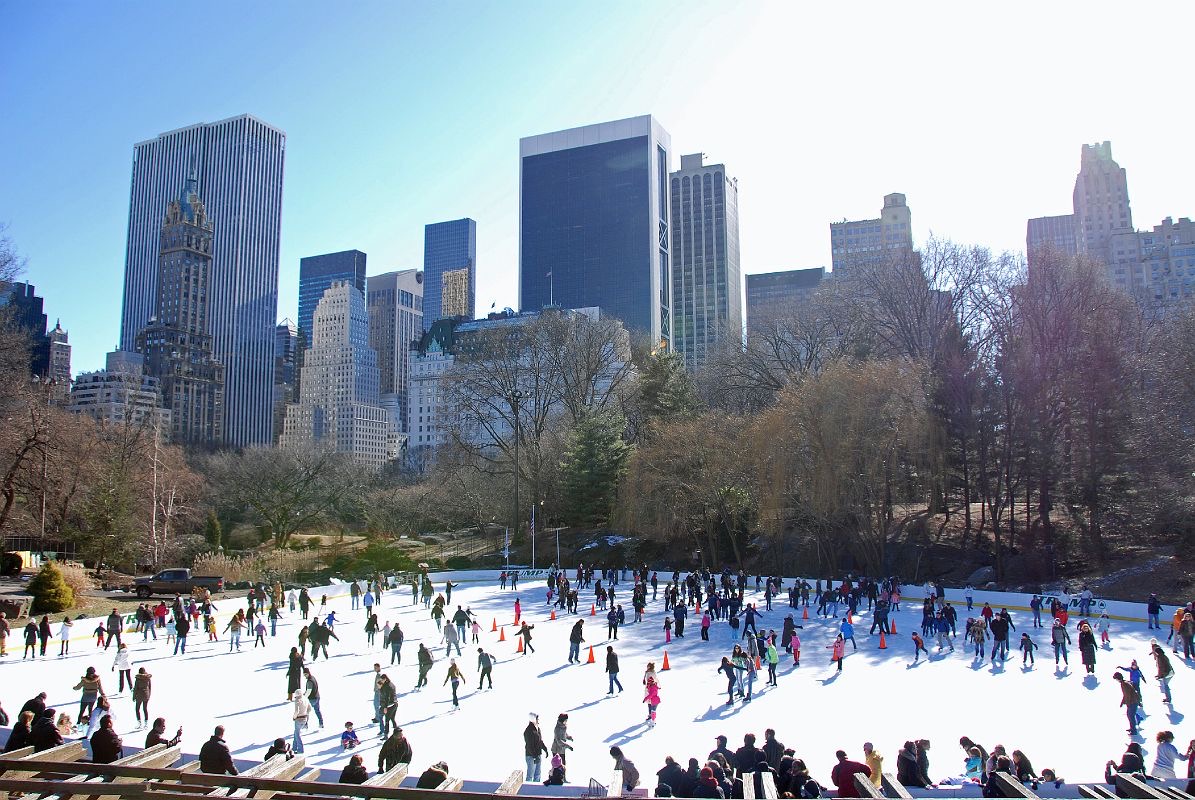 Love Story, Serendipity, Home Alone 2: Lost in New York, and Gossip Girl have all filmed at this iconic skating rink at the south eastern corner of Fifth Avenue. It will make you feel a bit as though you were transported back in time, skating in a rink surrounded by trees, oblivious to the city around you.

This rink is also not Olympic sized or Olympic shaped. It’s sort of shaped like a gumdrop. This can be super fun, and, in a way, add to the charm. It can also throw some hard core figure skaters and hockey payers who come to practice their programs or run skating drills.

Wollman Rink makes a great pairing with either the Central Park Zoo or a walk down Fifth Avenue to gaze at the holiday lights.

Depending on the day, the rink might set you back $34 a person (price includes skate rental) and there is a $5 “spectator” fee to watch. Wollman Rink only accepts cash, so come prepared!

THE RINK at ROCKEFELLER CENTER

Elf, Home Alone 2: Lost in New York, The Today Show, and more all feature this iconic Rockefeller Center Location. You will be skating in the heart of Midtown, surrounded by beautiful Art Deco architecture, the famous golden “Prometheus Bringing Fire to the People” sculpture, and, depending on the time of year, the famous Rockefeller Center Christmas tree!

This rink is smaller than an Olympic size rink, and, as a result, can at times feel more crowded than the others. That being said, you’ll also feel like a celebrity with holiday shoppers taking a break from their errands to gaze down and watch the mesmerizing patterns of the skaters below them.

This rink pairs nicely with any of the Rockefeller Center activities: Shopping, Top of the Rock, Radio City Music Hall, the NBC Studio tour, attending a taping of a television show. Kids love the Lego Store, Nintendo Store, and F.A.O. Schwartz. Adults love getting a drink at the Rainbow Room.

Standard admission is $25, with an $18 skate rental. During the holidays, General Admission rises to $35.

THE RINK at BRYANT PARK 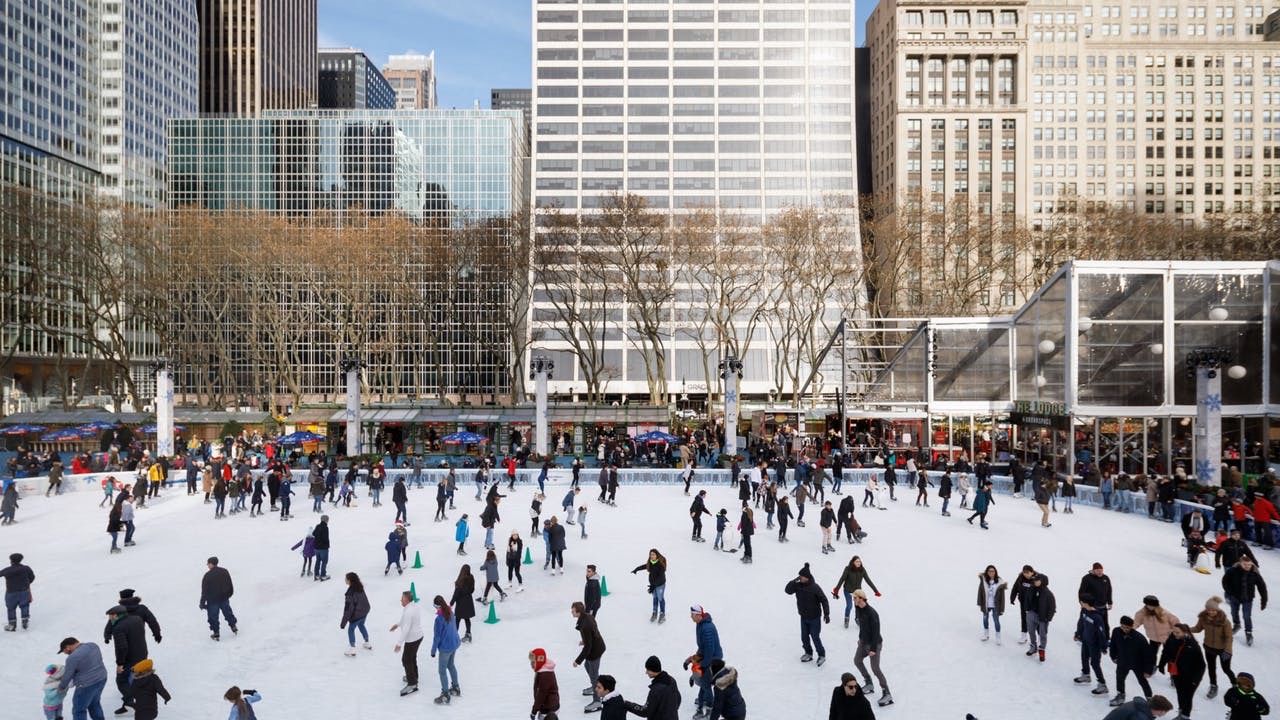 I love this rink. It’s an Olympic sized rink nestled in the “Backyard of Times Square.” Around the rink are Holiday Shops, where local New York City artisans sell one of a kind unique New York items. This “Bryant Park Winter Village” is one of the best places in the city to buy a souvenir or special gift. There are also food stands surrounding the rink where you can find a perfect snack to warm up.

This rink used to be a bit of a secret, but has recently become one of the most popular destinations in New York City. During peak time, be prepared to wait a bit for admission.

This rink pairs nicely with seeing a Broadway show, Grand Central Terminal, or shopping at Macy’s.

General admission is technically free, thought they do charge for skate rental. There are also a series of “express” prices, that allow you to skip the line.

THE RINK at BROOKFIELD PLACE

This rink is a rare New York hidden gem! Few people know about this rink, so you will have room to spread out while skating. In my opinion, this rink is also the best rink if you have very young children. They have these super cute polar bear shaped “Skate Aids” kids can hold that help them stay on their feet instead of falling. These “Skate Aids” cost $5 per 30 minutes of rental. This rink tends have less intimidating skaters racing around and more casual kids having fun.

The view is also fabulous. The rink is on the Hudson River. You can see One World Trade Center from the rink, and, as you walk around the area, you can get some stellar views of the Statue of Liberty. If you need to pop in and get warm, the rink is conveniently located right outside Brookfield Place, which has food halls, restaurants, and shops, which are all indoors and warm!

This rink pairs very nicely with a trip to One World Trade Center, the Statue of Liberty/Ellis Island, and Wall Street.

Winterland is the new kid on the block as far as rinks are concerned. The newly revived Pier 17 has made the most of its rooftop by offering summer concert series and a winter ice skating rink - all with breathtaking views of the Brooklyn Bridge. The entire Seaport District has wonderful winter activities, including its own stunning Christmas tree. The South Street Seaport is a trendy area with great restaurants, yet it’s all still new enough that you’ll feel ahead of the curve going.

Depending on the day, rink admission plus skate rental is only $23-$35, making it one of the more budget friendly rinks. You can also skate as long as you would like to after your arrival window time.

This rink pairs nicely with a walk across the Brooklyn Bridge, a Hornblower dinner cruise, a water taxi boat tour, or even some time spent in Chinatown.

Where Do Real New Yorkers Eat?